For Those About To Blog, We Salute You

As I’m packing for my vacation, I can’t help but be reminded of the trip I took for work a couple of months ago.

The first thing about that trip to Calgary was that it was my first time flying in about a decade. I had forgotten how it felt, especially the take-off. Accelerating that fast kind of freaked me out a little at first. As we left the ground and started climbing, I’d pretty much gotten used to it.

As we were landing, we encountered quite a bit of turbulence, which I didn’t like at all. While I did get used to it a little bit, I remembered that, oh yeah, I’d always hated turbulence. I was wishing that they had handle bars on the backs of the seats so we had something to grab onto for dear life.

The second notable thing was I’d been reminded what we’re allowed to travel with and, more importantly, what we’re not. On my way through security coming back, I put my keys in the tray and passed them through: 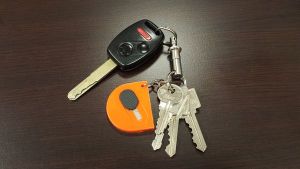 When I got to the other side and picked up my keys, the security guard asked what I had hanging off of it. I showed her and she noticed the pocket knife. I had completely forgotten I’d had it and she told me I wouldn’t be able to go through unless I handed it over. So rather than explain that it’s something I carry just for convenience (you never know when you might need to open a package, after all) I took it off.

I teach a transportation security course, so this gave me something to tell students about. They don’t take chances, no matter how remote the possibility.

While I don’t really need to have it, it is handy to have. I thought I had replacements at home but couldn’t find any. Thus began the search for another pocket knife. I thought I’d gotten them from the Dollar Store so I went back there but couldn’t find any. After searching high and low, I finally found something similar but it was a little bigger and I found that it wouldn’t always stay closed, which was not safe for keeping in my pocket.

Then, a couple of weeks ago, when looking for something else, I found a replacement. It was buried in a junk drawer, forgotten about and was placed back on my keyring immediately.

Now that I’m preparing to fly again, I’ve taken it off. It doesn’t matter that it was never intended to inflict harm or that it would probably be almost impossible to do so if, for whatever reason, I actually did intend to do so; it’s best just to leave it behind.

There’s that, plus I can’t count on finding a replacement if it gets taken away, so here it will stay. Best not to take chances.

Home Hardware is closing down here in Kitimat. That’s sad for the town, great for us shoppers!

Yesterday, I went in for the second time since I learned of their closing sale. I picked up a contraption that heats water really quickly, even faster than a tea kettle. I saw it about a week earlier, when everything was 33% off, and the original selling price was just under $100.

I decided to pass on it and I vowed that if it was still there the next time I went it, I’d grab it. Good thing I did, because when I went in yesterday it was 50% off so I got for less than $50. I tried it out and found that it’s awesome. I don’t drink coffee and rarely drink tea, even though I do enjoy tea a lot.

The problem is the wait for tea kettles to heat up, then being left with a lot of leftover water as I usually only have one cup. That, plus the fact that it’s boiling hot. I’ve always hated hot beverages and whenever I make tea I usually wait about 20 minutes for it to cool down enough so I can drink it without burning my tongue.

Not only does this water dispenser heat water quickly (in less than 90 seconds), it’s hot, not boiling hot (if I wanted something boiling hot, I’d drink a cup of magma). I still have to wait a little while for it to cool down, but not as long as before. Overall, I’m pretty happy with it and I’m drinking more tea than ever.

When I went up to the counter to pay for it, I noticed some of these on the wall behind the counter:

They were there all along and I never even noticed them. I knew I wanted to get some, but one thing I had to decide was: how many? I quickly decided on four.

I like even numbers (you down with OCD? Yeah you know me!) and two seemed like too few and six felt like overkill. This should cover me for the next decade, or the next four trips through airport security, whatever comes first.

The only other thing to decide on was the color. When I got them from the Dollar Store, I had no choice in color. They came in packs of two: one yellow, one orange. This time I had a couple more options so I channeled my inner Morgan Freeman and said in my mind…

“And yes, Mister Wayne, it does come in black.”